A report from Old Mutual shows how much money South African households are managing to put away each month under a very stretched economy.

Overall consumer debt is growing, and the fact that ratings agency S&P flagged it as a major risk to the country’s banking sector should act as a wake up call for consumers and banks, said Neil Roets, CEO of debt counselling company, Debt Rescue.

Roets said there had been a noticeable increase in the number of distressed consumers who have come for assistance in servicing their growing debt load.

“We know that debt levels are escalating because we see this on the balance sheets of indebted consumers coming to us to be placed under legislative debt review.

“Many of them are on the verge of bankruptcy and the only way they can hold on to their belongings and pay off their mounting debts over a longer period of time is through the process of debt review,” Roets said.

Meanwhile, the National Credit Regulator (NCR) said about 10-million South Africans were over-indebted, which meant they were unable to meet their financial obligations timeously.

According to the NCR, South Africa has a total of 23.88 million credit-active consumers who use 75% of their pay cheques to service debt.

And in its Banking Industry Country Risk Assessment (Bicra) for South Africa, S&P said it estimated the country’s per capita gross domestic product at about $6,000 (R78,000) for this year, which in US dollar terms was still lower than in 2010.

Matthew Pirnie, an analyst at S&P, was quoted as saying that the rating agency expected very modest growth in retail lending over the next 18 months as the low economic growth, rising unemployment, and political uncertainties continued to undermine consumer confidence.

“We continue to believe that domestic households pose the most significant source of risk for the banks because of their relatively high leverage and low wealth levels compared with other emerging markets,” Pirnie said.

In its Key Savings & Investment Trends report 2017, Old Mutual found that most households are under immense pressure and making it from payday to payday is a fine balancing act.

The research comprises interviews among working South Africans living in major metropolitan areas, and examined attitude to finances in general and savings in particular.

Old Mutual asked respondents to estimate their monthly savings in absolute rand terms since 2013. Its 2017 data shows a marginal decrease in nominal amounts across the lower three income groups and a marginal increase in the upper two income bands. 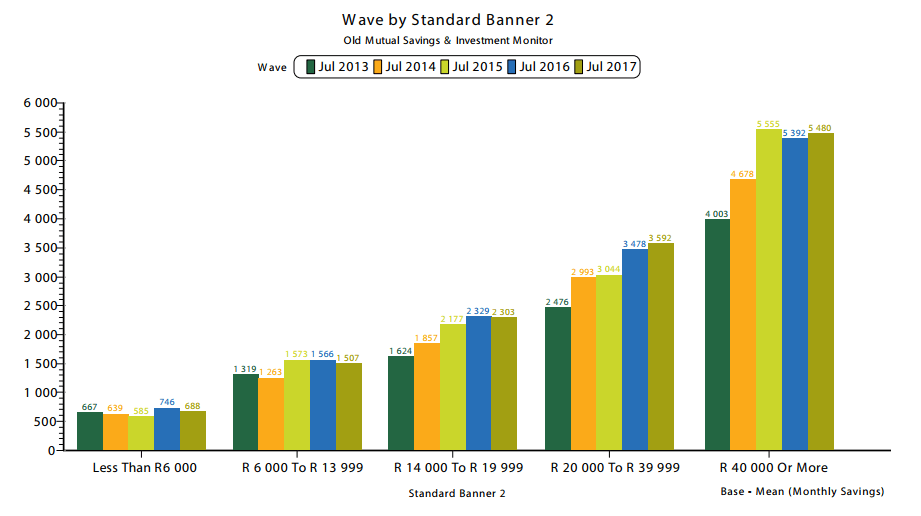