South African households are likely to start to feeling the pinch from surging petrol and paraffin prices, marked increases in excise duties on alcoholic beverages and tobacco products, and below-inflation increases in the monetary values of social grants.

Commenting on the latest FNB/BER consumer confidence index (CCI), chief economist at FNB Mamello Matikinca-Ngwenya said that these factors – coupled with the fact that the Social Relief of Distress grant and TERS programme are set to expire at the end of April – have the potential to deflate the confidence levels of less affluent consumers in the coming months.

The FNB/BER consumer confidence index published on Tuesday (16 March) increased by three index points to a level of -9 in the first quarter of 2021.

Prior to the Covid-19 outbreak, a deterioration in South Africa’s economic prospects already saw the CCI retreat from +7 at the end of 2018 to -7 in the fourth quarter of 2019.

The sudden onset of the coronavirus pandemic and the concomitant severe economic restrictions saw consumer confidence collapse to a 35-year low of -33 in the second quarter of 2020.

The recovery to -9 index points brings the CCI back in line with the reading recorded in March 2020, just before South Africa entered its first strict nationwide lockdown.

Although it is heartening that the CCI has now recovered most of its Covid-19-induced losses, consumer confidence in general remains depressed – the latest reading of -9 is still well below the average CCI reading of +2 since 1994. 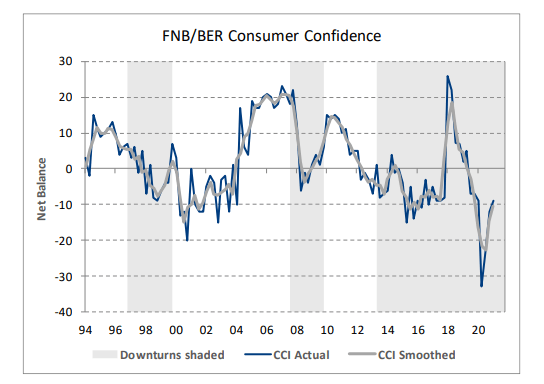 “A range of positive developments in all likelihood supported the sustained recovery in consumer confidence during the first quarter,” said Matikinca-Ngwenya.

She said that these positive developments include:

Notwithstanding some challenges and delays, the eventual commencement of the Covid-19 vaccine rollout to thousands of healthcare workers could also have lifted the spirits of some, said Matikinca-Ngwenya.

“There were also some adverse developments that probably curbed the upward momentum of the CCI during the first quarter. Knocked by a plunge in company profit levels in 2020, lower end-of-year performance bonuses likely checked the confidence levels of high-income consumers heading into 2021.”

Workers in the hospitality and entertainment industry faced reduced working hours and earnings due to the absence of international tourists, the closure of beaches, the alcohol sales ban, restrictions in the number of people at gatherings and the extended curfew during the crucial summer holiday season.

“The cumulative 300-basis-point cut in the prime interest rate and shift to work-from-home and home-schooling boosted sales of office furniture and equipment, electronics and DIY hardware products during the second half of 2021.

“However, in the absence of further interest rate cuts, and with an increasing number of workers now returning to company offices and more schools reopening fully, the demand for these types of durable goods has started to wane.”

Debt review company, Debt Rescue, warned at the start of the month that increased fuel prices, that knock onto the entire supply chain of agriculture, manufacturing, distribution and the price of goods, will be felt by consumers.

“Especially the millions who have lost their jobs, had salary cuts, or have been put on short-term employment,” said Neil Roets, chief executive of Debt Rescue.

This was echoed by Efficient Group economist Dawie Roodt who said that the increases will come at a particularly difficult time for consumers.

“This is happening in an environment in which more than a million people have lost their jobs while a significant portion of those with jobs have actually seen a reduction in their wages. And while consumer demand for fuel is generally low, fuel price increases impact on businesses which is why we are likely to see an increase in food prices,” he said.

Fuel levy increases at a difficult time in the country’s economy will contribute to what are expected to be extremely high fuel price increases at the end of March going into April, the Automobile Association (AA) warned on Monday (15 March), commenting on unaudited mid-month fuel price data released by the Central Energy Fund.

The AA said the forecast increases are worrying and could have a severe impact on an economy already reeling from a number of negative factors including corruption, over-spending on the civil service, and the largest contraction in a century.

These expected increases do not include the 26-cents a litre increases to the General Fuel and Road Accident Fund levies (excluding the one cent increase to Carbon Tax) announced by the minister of finance in his February Budget, which come into effect in April.

Within the current scenario with the addition of the levies, petrol is expected to increase by as much as R1.16 a litre and diesel by 92 cents a litre.

“This means that at least 35% of the cost of a litre of this petrol will be taxed. The price of diesel (currently pegged at R14.12/l) will increase to R15.04 of which R5.96 (including increased levies) will be taxed – or at least 40% of the total cost,” the association said.

The AA said that the government can no longer ignore the knock-on effects of severe fuel price rises. “The cost is not only direct, but throughout the value chain, and is battering consumers from all sides. It requires urgent review to help ease pressure on consumers who are battling to stay financially afloat.”