Cape Town – The rise in the cost of living is fast outstripping consumers’ incomes.

According to Statistics SA (StatsSA), fuel and the price of meat has increased by 9% compared to last year. Primary and secondary education has increased by 7.7% while books and stationery have gone up by 7.2%.

Water and other services have gone up by 7.2%, while insurance and financial services have increased by 7.2% and 6.4% respectively.

StatsSA said the consumer price index was at 4.5%.

“Salary increases do not match the cost of living increases. Over and above the direct increases that are becoming the norm, such as fuel and electricity, and their secondary effects on food prices, the VAT increase has hit people’s pockets very hard.

“The latest fuel price hike has taken us to the highest fuel price in this country’s history, with an expectation of massive knock-on effects.

“The emerging middle class is struggling to hold on, as the continued increase in living expenses is eating into the bit of extra cash that they had managed to set aside.”

Roets said it was becoming extremely difficult for consumers to even consider saving when they were struggling to make ends meet.

“A greater priority is putting food on the table first. Consumers are struggling to juggle their various financial commitments and each month with new increases it just becomes worse.” 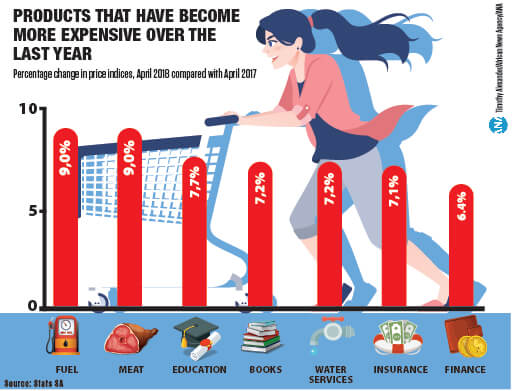 Due to the increases, Roets went on to say, consumers were under pressure, with many considering additional debt in order to get by.

An Investec report stated: “In recent months, petrol prices have risen significantly in South Africa, by R2.03/litre, with another 25c/litre increase in the petrol price for July following recent rand weakness, which will place some small upward pressure on the inflation outcome for that month, along with the rise in electricity tariffs (of around 5%).

“The rand has weakened from R11.51/USD to close to R14/USD on heightened global risk.”

Federation of Unions of SA general secretary Dennis George said corruption was behind most administered price hikes, such as electricity and water.

He said workers were calling for double-digit increases to assist them in coping with price hikes.

“The salary increases that workers are offered are not enough to make ends meet. Most workers use most of their money on transport, and we all know that when fuel goes up, fares increase too.

“The government needs to end the corruption and subsidise transport.